…then his father Zechariah was filled with the Holy Spirit 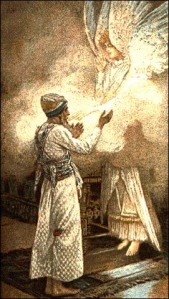 The readings this morning had me thinking about the triune God – the presence in all of the created world of God, the Father, Son and Holy Spirit, from the beginning.  And what I was set to think about is how challenging it is for many to understand a triune God as ONE God.  Get into that debate with any non-Christian, atheist, agnostic, secularist and you have your work cut out for you.  Most would rather just avoid the debate all together and not think about how it is that God, the Father, Son and Holy Spirit are three in One and are One.

I haven’t really ever been too troubled or confused about the Trinity, understanding it in this way;   just as I am known as a child, sibling, parent to the same people, so is God known to me as Father, Son, and Holy Spirit.  That I am a child to one doesn’t make me not a sibling to another.  That I am a parent to one doesn’t negate my identity as a child to another.

But one thing I hadn’t reconciled for years was how Jesus could be present through all time  – co-eternal with God, the Father.  Continuing with my personal identity analogy, I may be known as a child, sibling and parent, but those identities happened sequentially.  I wasn’t born as all three.  One life had to happen before I lived into another.  I was a child, then a sibling, then a parent.  So this was the rub with my understanding of the Trinity and it’s eternal nature.

What I eventually came to understand is that God the Father Son and Holy Spirit are one and from the beginning, but the manifestation to the people of God was sequential.  That is, God’s people came to know the fulness of God in time and in sequence.  And by the grace of God found in the Word, God’s people glimpse and know in part the eternal presence of the triune God.

And so, today, in the Word, I paused and wondered and awed at the presence of the Holy Spirit in God’s people long before Jesus was born, died, and ascended into Heaven.

It was in the gospel  passage where the Spirit first had me pause.   Anytime I pause to lift my eyes from the words and wonder, I suspect the Spirit has something to say.

Today’s gospel in Luke tells the story of the naming of John the Baptist.  Pretty straightforward.  Family and friends gathered on the 8th day for the ceremonial naming and circumcision.   Expectation is that the baby will be named after his dad,  Zechariah.   But wait, mom has a different idea.  She says, no – his name will be John.  All eyes on dad.  Are you good with this?  Not so much.  Instead of speaking, dad writes down on a tablet, “His name is John.”  And then?

67 Then his father Zechariah was filled with the Holy Spirit and spoke this prophecy:…

He began speaking in tongues, the language of the Holy Spirit.  Here is how it is described  in scripture:

64Immediately his mouth was opened and his tongue freed, and he began to speak, praising God.

Now, without getting into speaking tongues and all the assumptions you may have about what this is, how and where it is manifested today, who speaks in tongues, who is gifted with interpreting, what it sounds like – no matter your level of comfort, acceptance or knowledge of Holy Spirit language (tongues) – what is clear, at least to me, is that Zechariah – a faithful servant of God and a man of the Law is filled with the Holy Spirit to the point that he speaks God’s language and he is heard.

Truthfully, for years, I had thought of the filling of the Holy Spirit to be an exclusively Christian phenomenon.  How could someone be filled with the Holy Spirit if Jesus hadn’t even been yet born?  Wasn’t the Spirit to come onto and into God’s people at his Son’s ascension?   Didn’t the Spirit pierce the hearts of the people of God and the Law after Jesus lived, died, and ascended?  Wasn’t the touch down of the Holy Spirit on a person of God a necessary and first step to transformation of life into Grace and and out of Law? If so, how could a person of the Law be filled with something that hadn’t seemed to have occurred?

This entry was posted in Whispers and tagged Father, Holy Spirit, Jesus, WORD. Bookmark the permalink.