Truth and Witness from a Bed of Clouds

Posted on September 2, 2014 by Trinity Seasons

Acts 12:6 The very night before Herod was going to bring him out, Peter, bound with two chains, was sleeping between two soldiers, while guards in front of the door were keeping watch over the prison. 7Suddenly an angel of the Lord appeared and a light shone in the cell. He tapped Peter on the side and woke him, saying, ‘Get up quickly.’ And the chains fell off his wrists. 8The angel said to him, ‘Fasten your belt and put on your sandals.’ He did so. Then he said to him, ‘Wrap your cloak around you and follow me.’ 9Peter* went out and followed him; he did not realize that what was happening with the angel’s help was real; he thought he was seeing a vision. 10After they had passed the first and the second guard, they came before the iron gate leading into the city. It opened for them of its own accord, and they went outside and walked along a lane, when suddenly the angel left him. 11Then Peter came to himself and said, ‘Now I am sure that the Lord has sent his angel and rescued me from the hands of Herod and from all that the Jewish people were expecting.’

12 As soon as he realized this, he went to the house of Mary, the mother of John whose other name was Mark, where many had gathered and were praying. 13When he knocked at the outer gate, a maid named Rhoda came to answer. 14On recognizing Peter’s voice, she was so overjoyed that, instead of opening the gate, she ran in and announced that Peter was standing at the gate. 15They said to her, ‘You are out of your mind!’ But she insisted that it was so. They said, ‘It is his angel.’ 16Meanwhile, Peter continued knocking; and when they opened the gate, they saw him and were amazed. 17He motioned to them with his hand to be silent, and described for them how the Lord had brought him out of the prison. And he added, ‘Tell this to James and to the believers.’* Then he left and went to another place.

This whole passage reads like a dream to me.  As if Peter were on the other end of the telephone line and reporting the crazy dream he had the night before.  Light, dark, angels in the night.

Perhaps it reads like this to me today because as part of my own spiritual care I am participating in personal therapy that is presently focused on my dreams. Dreamwork is a common tool for psychotherapists referring to the:

I am an advocate for therapy in general and Dreamwork therapy for discernment specifically, especially for people working in pastoral ministry and in God’s church.  Like physical exercise for the body, and God’s Word and worship for the soul, psychotherapy is a way of holding up the mirror to ourselves to see how our insides manifest in life, how we live – or not – as we believe.  To whom are we accountable? What has agency in our life? The Holy Spirit or the ego?

The therapist from whom I seek counsel received his doctorate degree in Psychology from a seminary so that all of his reflection and counsel is through the lens of the gospel.  Not the doctrinal, moralistic, us-them bible talk, but the gospel of love, forgiveness, and obedience (responding to God’s will) to the One, Holy God.

The dual lens of theology and psychology favors an important emphasis on the gospel. It broadens – as in the broad place – the narrowly focused ego lens so often encountered in therapy, where self-determination and mind-over-matter are esteemed the healing agents of transformation. 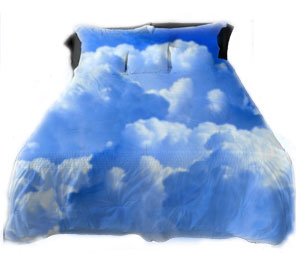 Dreamwork with a therapist who understands the unconscious as the place where God whispers and guides is, for me, an important discernment tool.  Where is God in this? Where am I being lead? Where is self-ego getting in the way of living into who God created me to be?

What is described in the selection from the Book of Acts may have occurred just as reported. Factually, it may all line up.  But this isn’t the take-away point if it is the Holy Spirit who is reporting. The Spirit had me read Acts 12 as if it were a dream of Peter’s and in the way he describes the event I hear his unconscious voice.  And I heard my therapist asking Peter to wonder about what he associated with angels, prisons, gates, Rhoda, Mark – just as I am asked by him what I associate with this thing or that, with this person or that in my personal dreams.

And through that un-packing, the Holy Spirit makes known the Word of God.  God’s Word for Peter – for me – for all believers:

the Lord (brings us) out of the prison.

God frees us.  God releases us from prisons.  God saves us from ourselves.

And there’s more.  Peter is given the Word to move on – to proclaim this truth to others. To witness.

And he added, ‘Tell this to James and to the believers.’* Then he left and went to another place.