Season of discontent is just a season

Posted on September 15, 2014 by Trinity Seasons

Job 40:7 ‘Gird up your loins like a man;
I will question you, and you declare to me. 8 Will you even put me in the wrong?
Will you condemn me that you may be justified?

Now, granted, this is a talk between God and Job and Job is being grilled.  So, finding any sort of personal application here may be a bit presumptuous.  But, what came to mind – a whisper to my heart, really – was a familiarity with this kind of tough talk and being grilled and what surfaced was the contemporary phrase, ‘tit for tat‘.  I was paused to think of many a conversation I’ve had with others – humans, not with God – wherein I could hear myself or the other saying,

Will you put me in the wrong?  Will you condemn me that you may be justified?  Is this all about tit-for-tat?

I’ve had a hard time finding the right place in this kind of argument.  Where should I stand?  Am I being self-righteous?  Holier than thou as Job seems sometimes to try to be?

Odd phrase, “tit for tat.” It’s origin appears to be from Olde English and its first use in a poem, expectedly (this for that, tit for tat). The phrase has moved its way through the ages in various applications but at its core meaning, it is about retaliation – mild thought it may be – and not revenge, but retaliation. Someone does wrong and so the other justifies their wrong in light of that.  You do this, so I am justified doing the same.

Is God making such a claim?  Not at all.  God is simply making a point with Job that if he wants to challenge God, then he better speak up and realize with whom he, Job, is speaking.  Job may not see the suffering that has come his way the way God does, and the Lord, says, fine, talk with me about this.  Don’t run away.  And don’t resign yourself to running away from me because you think I, your Lord God abandoned you.  Not tit-for-tat. No room for retaliation.

Who does this kind of retaliation against an other – finding justification for doing something that serves you, though hurts the other,  because a person another person seems to have done the same – (Job blaming God for his suffering and refusing to talk) serve?

This kind of retaliation has found its way into game theory and most recently and popularly in the infamous Prisoner’s Dilemma. 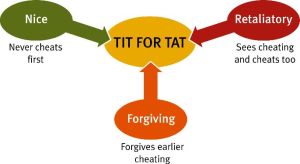 Bottom line is that what tit-for-tat requires above all else for comprehension and application is an opponent.  There’s no theory of negotiation without an opponent. In the Book of Job, the repartee between God, Job, the supposed friends – me vs them, me vs Him, me vs me – requires opposition and an opponent. Someone on the other side.

I suppose what this reading shows me today is that even in loving relationships there are seasons of opposition – where the one we love is an opponent.  This is the unique blessing I find in the Book of Job.  That in the most steadfast, loving relationship of all – that between the Lord, God and His created, loved Job – an intense season of opposition unfolds.  And in it and through it Job just keeps fighting – threatening to not talk anymore, accusing God of doing one thing after another to make him suffer, resigning himself to his undeserved fate. God is Job’s opponent.  Job tries tit-for-tat game theory. The season rough, but…

But he doesn’t walk away.  Job doesn’t stop talking.  Nor does God.

It’s a season of discontent.  A season.

This entry was posted in Whispers and tagged Lord, love. Bookmark the permalink.