Not in our imagination, not in a formula either: Both And – the third way – is the way to know God’s Word

Genesis 41:17Then Pharaoh said to Joseph, ‘In my dream I was standing on the banks of the Nile;18and seven cows, fat and sleek, came up out of the Nile and fed in the reed grass. 19Then seven other cows came up after them, poor, very ugly, and thin. Never had I seen such ugly ones in all the land of Egypt.20The thin and ugly cows ate up the first seven fat cows, 21but when they had eaten them no one would have known that they had done so, for they were still as ugly as before. Then I awoke. 22I fell asleep a second time* and I saw in my dream seven ears of grain, full and good, growing on one stalk, 23and seven ears, withered, thin, and blighted by the east wind, sprouting after them; 24and the thin ears swallowed up the seven good ears. But when I told it to the magicians, there was no one who could explain it to me.’

I missed the daily office yesterday, so this morning decided to start out in the Genesis passage above before turning to today’s. Didn’t get any further than here.

I dream. A lot. And I usually recall my dreams a few times a week and spend a few minutes in the morning thinking about the people that appeared or the circumstances. I’ve learned through some dream work in years past to associate rather than translate, literally. So though I may dream of a certain person, it is often not the case that the ideas associated in the dream with that person is what my dream was really about.

The Genesis dream account from above is packed with numbers – almost to the point of distraction.   Seven, in this particular passage. Numbers appear in a number (pun intended) of biblical dreams and prophecies.

I don’t think I can recall any dream I have ever had that contains such specificity when it comes to numbers. Three apples might show up in a dream, but if I were recalling my dream to someone to help me understand ‘what the spirit was saying to me’ I think it unlikely I would report “3 apples” – more likely I would say, “some apples were on the table in the kitchen.”

So. Numbers. Is their appearance in biblical dreams and in prophecy an indication – a clue or tip off  –  that God is communicating something about His will and plan that we are to comprehend, numerically?  By any measure, God’s people have been more than fascinated with the numbers that appear in the bible.  Many have devoted their lives to linking sevens, fours, one,  twelves, threes found in scripture to relay a deeper meaning or message from the Holy Spirit. How many times has the formula for end times been extracted from scripture based on how many this or how many that only to be eclipsed by -well – reality – not formulas or inventions or our making? Is there something to be ‘discovered’ in the numbers that appear in biblical dreams and prophecies? Or is it possible readers invent theories – end times for examples – that accommodate the numbers that are there? 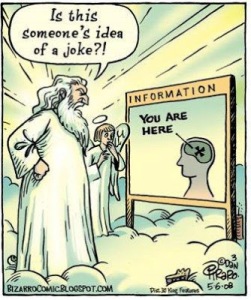 Is God a mathematician? Maybe an invention of our minds, as Dan Piraro suggests in his illustration to the left?

That was the title of a book by astronomer Mario Livio who, though not an atheist, is not a believer in the creator God and leans toward the side of the equation that puts God in our minds – our consciousness.

Nonetheless, I got something out his book that has some application I think, to the way we read scripture – numbers and all.

Where Livio caught my attention was in his explanation of an ongoing dispute amongst mathematicians and scientists about the role of the human mind-   our consciousness – in the mystery of life and the universe. 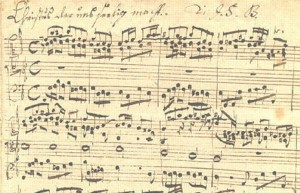 As these mathematicians talk about discovering rather than inventing great equations, Bach – arguably the most brilliant composer of all time –  set out to discover the musical rules behind the universe – he never purported to invent them.

The other theory – that mathematics is invented – is a newer, but still centuries old, theory. It tends today to be embraced by many in neuroscience. This theory goes that there is no such thing as one truth hanging out in the universe and instead what we know is all a construct and invention of the human mind. We make up the rules, we decide how to play the game. Like chess in some ways is the theory of invention vs. discovery. For example, imaginary numbers. You take the square root of minus one and well – there is no such number – so mathematicians invented a new concept and denoted this concept – the square root of minus one – with an “i.” 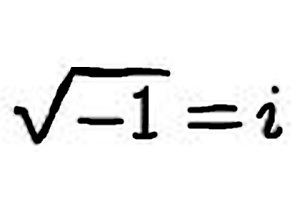 Once this concept was invented, mathematicians started to discover all kinds of relations with this imaginary number. So – discover was in essence, forced upon by virtue of inventing a new concept.

Ok. So this debate is ongoing because it is either-or. Black or white.

But some leading mathematicians have concluded it does not have to be asked or answered in this way . That mathematics is BOTH AND – that mathematics is a complex mixture of inventions and discovery, interacting in the ways of mystery as much as in the way of empirical observation.

BOTH AND. Amen, brother! Black and white just does not cut it in science or theology. There is just too much evidence to the contrary. When we read God’s Word through this black-white lens, what are we missing? Not the gray, fuzzy, area – not a compromised ‘word’ but something much deeper, I think.

Insisting on a Word being one way or another, of numbers meaning specifically one thing or another – well – it seems so much not the point.  Just as I got distracted in the Genesis reading by the ‘seven’ I think many Christians get distracted by details in scripture that prove or disprove some ‘thing’.

Big picture and Both And always win the day with me.

[1] All of this information is culled from the book, Is God a Mathematician by Mario Livio and a broadcast interview he did with Krista Tippett last year on the podcast OnBeing.org

This entry was posted in Whispers and tagged both and, mystery, scripture, see, truth, WORD. Bookmark the permalink.