All your works praise you, O Lord including the skies over Southern California

and his compassion is over all his works.

and your faithful servants bless you.

11 They make known the glory of your kingdom *

and speak of your power;

12 That the peoples may know of your power *

and the glorious splendor of your kingdom.

13 Your kingdom is an everlasting kingdom; *

your dominion endures throughout all ages.

14 The Lord is faithful in all his words *

and merciful in all his deeds.

Before beginning my morning readings today I prayed for presence – presence with God’s Word so that I might get back in touch with the pauses I used to encounter so frequently in the early days of blogging.  Of late, I have been questioning the usefulness of this exercise for my own spiritual formation and thinking of re-directing my writing energies to a different endeavor, a different story. But I haven’t done so.  Just thinking about it and find myself ever drawn to the Word and wondering what will float over my brain cells on any given day – and well, here I am writing about that.

Perhaps because of the prayer to be present with the Word, I was aware very early in the psalm reading that my eyes had lifted as I thought about the verse God is loving to everyone and his compassion is over all his works.  That means over all His works – the birds, bees, planet, skies, oceans.  Over all our Lord has compassion.  The Lord, God has domain over all creation and wishes it to be well. God is kind, compassionate, was delighted in all He created including the waters of the deep and the dome of the sky. 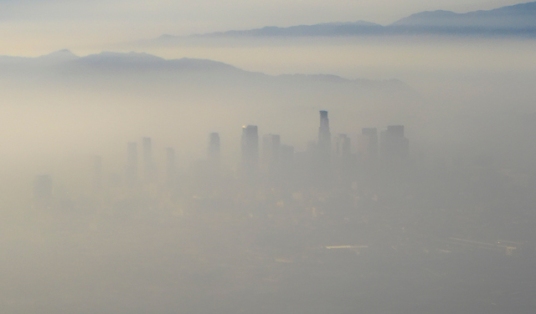 My family moved to Southern California from Northern California in the 1960’s. We lived in Arcadia for ten days before seeing mountains at our doorstep – the San Gabriel Mountains!  The air was that smoggy. Smog was a totally unknown thing to all of the kids, though my parents had some inkling. At going-away parties thrown for them from the small town of Chico, California they were given empty mason jars filled with ‘fresh air.’  I recall my eyes itching a lot – but again, I was a kid and thought nothing more than this is just how it was in our new home.  When we discovered we had mountains within walking distance of our backyard I was delighted, but the fact that I hadn’t seen them for 10 days didn’t register.

Here’s a short piece that describes the conditions we moved into in the late 1960’s written by Sarah Gardner of RadioGardner:

Los Angeles is a natural pollution trap. The surrounding mountains combine with temperature inversions to trap dirty air. Early on, smoke and fumes from steel and chemical plants, oil refineries and backyard trash incinerators – legal until the late 1950s – plagued the city.

As did pollution from automobiles. Los Angeles County had more than a million vehicles on the road as early as 1940. Just 10 years later, that number more than doubled as the post-war LA population and economy boomed.

… it wasn’t until 1975 that the U.S. required new cars to have catalytic converters, “the key piece of technology that allowed everything to change,” according to Mary Nichols, chairman of California’s Air Resources Board. In between, there were frustrating years of scientific research, industry denial, politics, protest and an unwavering attachment to the automobile.

Aha!  City leaders realized the negative effects of the smog on business and identified people’s role in messing up the air almost to the point of no return. Los Angeles had the worse air in the 1950’s and 1960’s because of the way the basin was shaped – God’s creation – but also because of  the habits of the people who lived there. The toxicity from automobiles and the auto-related industries alongside massive population growth was all a human-made catastrophe.

With all the changes mandated over the next 20 years, air quality in Los Angeles has never been better.  It took over 20 years but in the relatively short period of time the air was cleaned up and is now the cleanest it has ever been. It is astounding, actually – a true testament to our ability to reverse human-made disasters like air quality and climate change.  God calls us to be accountable and participate in the healing of His creation.

In all the years between 1976 and today it was only

on New Year’s Day when the winds blew away enough smog to not just see the mountains, but too, to see them in detail. New Year’s Day in Pasadena somehow was reliably, predictably stellar. Crisp, clear blue skies – no rain – green mountains, temperatures in the upper 60’s. Locals used to say it was because of the national TV broadcast of The Tournament of Roses that showed LA at its best, encouraging too many folks to move to the area. Newcomers thought LA always looked like it did on January 1.  It didn’t for years, but now it does.

God does have domain over all of His creation and wishes it  – like us – to be well.  God is kind and compassionate but we have to and do play a part in the wellness of ourselves and our environment.  We can’t just willy nilly rely on God’s grace to make us well.  We can pray to know God’s will for us is to be well – just as the environment and earth are to be well – but to tap into that available healing grace, we have to acknowledge our role in the illness, the disease, the toxic environment, the broken trust, the severed relationship. None of those who established Los Angeles as the dynamic community it did envisioned what a mess the air would come to be.  It seemed to many to be just a result of progress. Recall my parent’s friends giving us the mason jars in jest – that’s just what you get in LA.

Sometimes brokenness and illness is simply inherited – passed from one generation to the next without pause.  And illness and brokenness will perpetuate until someone, peoples, governments, God’s church, participates in the fix – enjoins God’s grace by prayer and action to heal.

God’s dominion endures through generations, eternally as the psalm reminds us today. For it to flourish as He willed, we must participate.  As the leaders in LA did over 20 years ago, suggesting the peoples trusted things could change to bring back the “glorious

Personal application? What part of my brokenness am I responsible for? If I inherited some brokenness, what can I do to stop living into it? What can I do with God’s grace to change how I think about something? How I am living my story for God’s glory?