Blindness, the War on Cancer, and the Seven Dwarves – Thinking about Sin

In 1971 President Richard Nixon signed into law the National Cancer Act authorizing the spending of $1.5 billion of research funds over the next three years to wage a war on cancer. The initiative for the Act had been funded, in part, by medical philanthropist, Mary Lasker, once quoted as saying, “I am opposed to heart attacks and cancer the way one is opposed to sin.”

The scientific community was not ready for this war – they did not know the enemy – the cancer cell – how it operated or from whence it came.  As researcher, physician and author Siddhartha Mukherjee wrote in his book, The Emperor of All Maladies: A Biography of Cancer:

In scientific terms…the war was disastrously premature… in the early 1970s, there really wasn’t a science of cancer. Researchers still did not understand what makes cells turn malignant. Now that they were so much in the spotlight, and in the money, they fell into bickering, demoralized, warring factions.

Science has learned much since this time recovering from the ill-suited framework of  ‘waging a war’ because of the work of researchers focused on understanding the enemy. In the past few decades lab scientists worked out the genetics of cancer, and traced the molecular sequence of jammed accelerators and missing brakes that release those first rebel cells. “Beating cancer now is a realistic ambition because, at long last, we largely know its true genetic and chemical characteristics.”

How akin is Sin to cancer?  The gospel gives us a peek at how mis-understood Sin was (and in some places, still is ) to God’s people.  Like Cancer, we have so often been wrong about its origins, how it manifests – whether or not it is a condition within or is it some external thing – discrete – that visits us, can be excised?  And if there are no outwardly signs of Sin, are we without?  And what does Sin actually look like – how is it outwardly manifested?

Certainly not in blindness.  Blindness was  – is – no sin, but a condition, a broken part some are born with.  The broken part not caused by someone else and not a bad moral choice. No one chooses broken parts.  We are all born with broken parts.  (In my sometimes sort of twisted mind’s eye I thought of this panel from Dan Piraro’s Bizarro comic that illustrates the difference between broken physical condition and Sin). 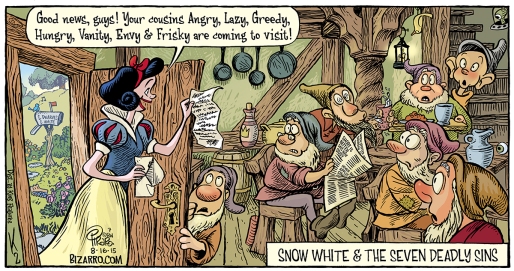 Scientists now know cancer cells reside within all of our bodies and that we don’t ‘get’ cancer, we provoke cancer, as Dr. Oz and others will say.

I think the same is true of Sin.  Sin resides within each of us and it is called the Flesh.  Part of how we are wired as human beings that seeks not God, but self.  And we are all vulnerable to Satan’s relentless invitation to Sin (as a cancer cells unchecked relentlessly reproduce) – to step away from God and towards self.

Being opposed to cancer and heart attacks  – as Mary Lasker equates with her aversion to sin  – fueled her and research partner Dr. Sidney Farber to incite a frenzied ill-fated ‘war on cancer’ with the sponsorship of the National Cancer Act.  It set too many doctors and researchers against one another and treated patients more as ‘specimens’ and bodies that harbored the enemy, than as people with cancer.

We are all opposed to Sin – our Father in Heaven, most of all.  But we have no more capacity for eradicating it from the ourselves – our own bodies – than the war-on-cancer researchers did by thinking of it as something outside, some discrete thing that can be attacked by human-made weapons.  Only with God’s help, with grace, forgiveness are we enabled to wage any kind of war against the sin within.

Understanding Sin for what it is and what it is not – understanding the enemy, its origins, how it attacks, how to combat – is pretty important to get right, to think about, to pray it – and to preach about, it seems to me. How many of God’s people have been judged by fellow Christians as unworthy because of a wrongly held belief about Sin and its origins?

This entry was posted in Whispers and tagged cancer, flesh, Jesus, sin, Spirit. Bookmark the permalink.