Courtesy Calls: how do you pronounce ‘Chrysostom’?

During the discernment process for ordination to the priesthood, I attended a weekend with others who were discerning the same call. These ‘discernment weekends’ are scheduled annually for the coming together of aspirants (that’s what I was) with a committee of folks, lay and ordained, whose vocation was to help discern for the institutional church whether or not each of us should continue – cross over to the other side of the Jordan – or whether we might consider a different path for ministry. The name of the committee is, the Commission on Ministry, and in The Episcopal Church they serve a critical function of …

…assisting the bishop “in determining present and future needs for ministry in the diocese” and to assist “in enlisting and selecting persons for Holy Orders.” …they interview candidates prior to their ordination … (https://www.episcopalchurch.org/library/glossary/commission-ministry)

Many such interviews and weekends occur in the journey of seeking Holy Orders, but during this particular one, I found myself to be a sort of foreigner. I was new to all the people present having moved into a different diocese and starting the process all over again – a three-year process I had nearly completed, elsewhere.

As welcoming as everyone was, including the four other aspirants, I felt like I often had – not so much a fish out of water, but sort of like a fish dumped into the San Francisco Bay from the ballast of a ship that had come from the English Channel. That might be stretching the metaphor too far but bottom line, I knew that though I received my seminary education at a more progressive seminary, (gratefully, by the way!) my thoughts about God’s church and its mission landed more on the conservative end of that spectrum. And so, I entered the weekend with some wariness – how would I be received? Would my experience in ministry thus far be accounted for?  How would I be judged?  Would there be any sort of litmus test?

At the end of the first day, I was paired with another to lead Evening Prayer. This was to be expected – all the aspirants would lead one worship gathering or another over the course of the next days.

My worship partner – a young man who had only just entered Holy Orders, having come from a different tradition entirely (Baptist) and only in the first year of his divinity degree, asked me – the older, cradle-born, MDiv graduate, GOE completed, aspirant – to introduce at the end, the Prayer of St Chrysostum[1] admitting that he had not yet learned to pronounce the saint’s name properly.

I recalled the challenge of mastering pronunciations in seminary – of learning to say names and prayers correctly – the right intonations, pauses, accents, etc. I was somewhat prepared when I entered having learned the liturgy phonetically as a cradle-born.  But ugh – not this name – I hadn’t learned or mastered Chrysostom even though his prayer I prayed nightly at Evening Prayer in seminary chapel.

It was crazy how I was flooded with all the feelings of inadequacy when my liturgy partner asked me to lead. Was this the litmus test?  I didn’t belong here on this weekend  – I wasn’t ‘the stuff’ of ordained ministry.   Who was I kidding?

As a seminarian, I felt woefully inadequate. I thought differently than my fellow seminarians and professors, not as critically, not as deeply or objectively. Seminary was hard for me on every level but most especially in thinking and writing and reading as an academic.

At this moment on this important discernment weekend, perched at the river bank desiring to be ‘one of them’ on the other side, all my insecurities about my critical thinking skills, worthiness, and scholastic shortcomings flooded my head. “Why don’t you lead the Prayer of St Chrysostom, since I’m just a newbie at this,” my partner suggested.  Ugh.

How that moment came back to me upon the reading from Judges, this morning.  The tribe of Gilead used a word to help them determine ally or enemy, to judge whether or not those attempting to cross the Jordan were worthy – all based upon their pronunciation of the word, Shibboleth.

…the tribes of Israel were divided by the Jordan River—some located on the west and some on the east. The eastern tribes, including Jephthah’s, had adopted certain pronunciations and practices of foreign nations, distinguishing themselves from their brothers in the west. The word shibboleth was an example. Those in Gilead pronounced it “shibboleth,” but those in Ephraim, west of Jordan, pronounced it “sibboleth.” The dialect was different – [2]

‘Are you an Ephraimite?’ When he said, ‘No’, 6they said to him, ‘Then say Shibboleth’, and he said, ‘Sibboleth’, for he could not pronounce it right. Then they seized him and killed him at the fords of the Jordan. Forty-two thousand of the Ephraimites fell at that time.

Pronunciation, vocabulary, cadence all matters when God’s people gather to worship together – not as a test of worthiness as it was used in Jephthah’s story, but simply to feel comfortable and be a part, no matter from whence you came and landed in our pews. 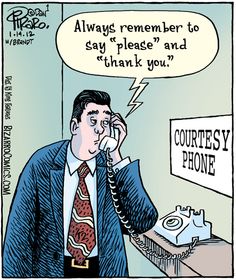 I wonder what it is like for people new to our parishes and liturgy. Does the liturgy itself make a newcomer feel inadequate? A friend who worships in a non-denomination church once commented to me how the cadence of our worship was strange and how difficult it was to keep up with the prayers – that they seemed to be ‘said’ and ‘recited,’ and not prayed.

I hope that all of us in the pews alongside someone we see struggling to stay with liturgy, might pause and show them the way across the Jordan. Take note of the fish who have landed in your congregation from a different bay. And worship leaders might do well to announce before worship the location of prayers in the bulletins, pronunciations, page numbers and the like – sort of like providing at the doors a Courtesy Call phone, as depicted in Dan Piraro’s Bizarro strip I have included here.

I think we need to be reminded to do this over and over, and not presume that even return worshipers know the ‘correct’ pronunciation. Our liturgy should never be for anyone a test of worthiness.

Praise God from whom all blessings flow.

[1] Almighty God, you have given us grace at this time with one
accord to make our common supplication to you; and you
have promised through your well-beloved Son that when two
or three are gathered together in his Name you will be in the
midst of them: Fulfill now, O Lord, our desires and petitions
as may be best for us; granting us in this world knowledge of
your truth, and in the age to come life everlasting. Amen.

This entry was posted in Whispers and tagged Book of Common Prayer, discernment, lectionary readings, liturgy, prayer. Bookmark the permalink.