Sirach 31:12 Are you seated at the table of the great?*
Do not be greedy at it,
and do not say, ‘How much food there is here!’ 13 Remember that a greedy eye is a bad thing.
What has been created more greedy than the eye?
Therefore it sheds tears for any reason. 14 Do not reach out your hand for everything you see,
and do not crowd your neighbour* at the dish. 15 Judge your neighbour’s feelings by your own,
and in every matter be thoughtful. 16 Eat what is set before you like a well-bred person,*
and do not chew greedily, or you will give offence. 17 Be the first to stop, as befits good manners,
and do not be insatiable, or you will give offence. 18 If you are seated among many others,
do not help yourself* before they do.

The readings from Sirach this past week have been nothing but just good, no great – advice. Godly rules to live by.  Like Proverbs, Sirach is the consummate Miss Manners and Dear Abbey of their day.  Good, no great, advice.

Yesterday, The Episcopal Church commemorated the life of Alfred the Great who died in 899, the first monarch to rule all of the Anglo Saxons. And the only king or queen in England’s history to be honored with the epithet, ‘the Great.’  For good, no great – reasons.

He was an unlikely ruler, the youngest of five sons all killed in battles with the invading Vikings during the mid 800’s. A humble man of deep faith, but also an intellectual. Alfred had a heart for God and God’s people who he understood to be both the Anglo Saxons of his lands and also the invading Danes. Those Vikings were not only defeated but baptized into Christianity and eventually fully integrated into the land they had tried to occupy. He made deals –  treaties –  with the interlopers that secured their place in his country and in God’s church.

Alfred was wise and courageous and used his temporal power for the spiritual, intellectual, and economic advancement of his people.  The list of his specific contributions is long, impacting nearly every aspect of the daily life of the people: church and state, national security, military, education, commerce, language, and civic duty.

Alfred became convinced that those in authority in church or state could not act justly or effectively without the ‘wisdom’ acquired through study, and set up schools to ensure that future generations of priests and secular administrators would be better trained, as well as encouraging the nobles at his court to emulate his own example in reading and study.¹  In addition to the schools and books imported for this purpose, Alfred wrote his own ‘code of laws to be used by all the people of Anglo Saxon England. 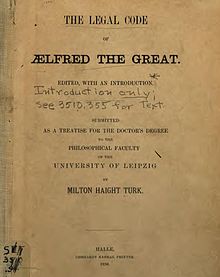 The Doom Book, (Code of Alfred) was a code of laws compiled from three prior Saxon codes, to which he prefixed the Ten Commandments of Moses and incorporated rules of life from the Mosaic Code and the Christian code of ethics.

Yup.  The codified, legal guidelines for good behavior and justice was based entirely upon God’s word and the Mosaic Law specifically.

In his extensive Prologue, Alfred summarized the Mosaic and Christian codes…and importantly, he laid the foundation for the Spirit of Mercy in his code:[2]  The last section of the Prologue not only describes “a tradition of Christian law from which the law code draws but also it grounds secular law upon Scripture, especially upon the principle of mercy“.

This principle of mercy recognizes that the final judge of any dispute or injustice is God, Almighty.  Woven through all the codes of the Doom Book, then, is the mandate to first give thanks and praise to God so that one would and could love neighbor, give to poor, serve,  turn the other cheek, and love the enemy.

The title “Doom book” comes from dōm (pronounced “dome”) is the Anglo-Saxon word meaning “judgment” or “law” — for instance, see Alfred’s admonishment: Doom very evenly! Do not doom one doom to the rich; another to the poor! Nor doom one doom to your friend; another to your foe! …reflecting Mosaic Law: “You shall do no injustice in judgment! You shall not be partial to the poor; nor defer to the great! But you are to judge your neighbour fairly!” (Leviticus 19:15).

This work  – the Doom Book – went on to be the foundation for England’s Common Law. And later, of course, woven into our constitution.

This entry was posted in Whispers and tagged law, WORD. Bookmark the permalink.