Posted on November 2, 2016 by Trinity Seasons

The gospel story of the Daily Office readings is one of seven healing miracles that take place on the Sabbath – each one illustrating the difficulty the scribes and priests have in seeing and knowing Jesus, blinded so by the legalistic practice of religion. Observing a law – a ritual – just because. No work on the Sabbath – that’s what law dictates.

But we know Jesus came not to abolish the law, but to fulfill. And in each instance of Sabbath healing, Jesus is filling out the intention of observance to give glory to God. What better way to glorify God than to demonstrate the power of His love and grace. And on the Sabbath.

But it was the first part of the story that paused me today – struck by the detail of ‘eighteen years’.

10 Now he was teaching in one of the synagogues on the sabbath. 11And just then there appeared a woman with a spirit that had crippled her for eighteen years. She was bent over and was quite unable to stand up straight. 12When Jesus saw her, he called her over and said, ‘Woman, you are set free from your ailment.’ 13When he laid his hands on her, immediately she stood up straight and began praising God.

The woman who came to Jesus for healing had been ‘crippled by a spirit for eighteen years.’ Details like this one intrigue me. Why eighteen? Why name any number at all? Why not, “crippled for years”? 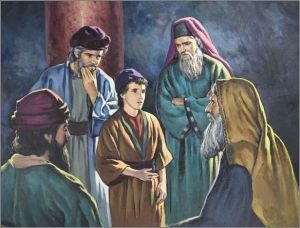 The duration of eighteen years in scripture is also associated with maturity and adulthood and most interestingly to me, the unaccounted for years of Jesus’ life. Jesus heard his call at age twelve. He preaches in the temple at age twelve, staying behind as his parents make their way back home. When he returns, his worried parents try to make sense of his less than reassuring answer that he was ‘in his Father’s house.’

In this day and age Jesus might have been marked a child prodigy – a genius – a gifted preacher. He might have been directed to a special school for gifted youth. A local temple might have ‘hired’ him to preach, featuring him as ‘the youngest this or that’ to come to our house. Worse, his parents could have contracted him out as a sort of side show act – the boy wonder, who preaches in the temple. 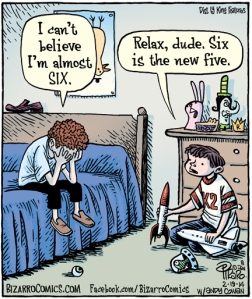 Ridiculous, of course, but this is what happens to child prodigies in our era – prodigies in every area – math, music, art, religion, athletics. The younger the better. And the innate, God-given gift is misconstrued to mean the child is wise beyond his or her years. Experience and practice play no part in the appreciation of the gift – we are just wowed by voice, the long drive, the composition, the staging and the lights. But how many tragic endings have we heard of those thrust onto the world scene too soon, as a child – those who have their day in the sun only to crash into adulthood with no developed life-skills for a new or different season. And adding insult to injury is the trend in our culture to prolong – put off – adulthood entirely – such a premium we have placed on youth.

Childhood lost and, more importantly, adolescence, ‘eighteen years’ lost. Years foundational for maturing, learning, honing the gift or skill, learning of the world, discerning the true call.  Years necessary to cultivate a life grounded in principles and ideas, not things or momentary fame.

Jesus may have preached and preached brilliantly at age 12, but his call, his purpose was so much bigger. A prophet and good teacher he was – and at age 12 that is all he could have known himself to be and all that his parents and others could have understood him to be – but he was more. The Son of God, delivered to the people for a singular purpose. The kingdom come on earth, to preach the good news in obedience to God all the way to the cross.

The last record of Jesus on the scene before he begins his ministry at age 30, is in the temple at age 12.  Now, in the gospel accounts, he’s all grown up and then some. Indeed, in his era, with life expectancy between 30 and 35 years, Jesus was already in the final season of his life. It is interesting to me, that God gave Jesus eighteen years to develop and mature – to find his way to himself, to cultivate the way to the Father.

Perhaps God gave the woman who appears before Jesus in today’s story that length of time, too, to mature and find her way to Jesus. For all we know, the woman was a peer, perhaps thirty, perhaps only nineteen. But either way, for eighteen years her body is occupied by a debilitating spirit. Like the Jerusalem Jews who had prioritized their own needs above making a home for the Lord in the temple – in their ‘bodies’ – for eighteen years? Or as those God delivered to the Philistines for eighteen years, had she now finally been humbled to know she needed God and came to Jesus?

I hear the Spirit saying to me today something about humility and the learning and work and practice necessary for ministry in God’s church. The church today might have grabbed Jesus up at age 12 and put him front and center with lights and microphones and slide shows and the like and it would have been too soon. Jesus needed the eighteen years to be what he was called to be and do what he was called to do. There is just something to be said for life experience – for living one’s faith through seasons of life.  And for being open, prepared, humbled to seek Jesus and receive grace from him.